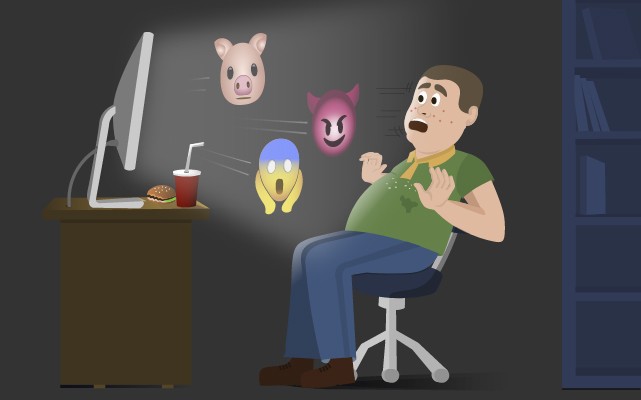 Whether we like it or not, bullying has been around since the beginning of civilization. It hasn’t truly changed its form over those years, it’s always the stronger ones who prey upon the weak, but it has evolved with the rise of technology.

A new form of bullying, namely cyberbullying, has become a growing problem in countries around the world. In its essence, cyberbullying doesn’t differ much from the type of bullying that many children have unfortunately grown accustomed to in school. The only difference is that it takes place online.

The following are a number of concerning statistics about cyberbullying that show the scope of this rising problem and the dire need for an effective solution.

What counts as cyberbullying?

If you’ve ever seen the TV host Jimmy Kimmel’s segment “Celebrities Read Mean Tweets,” you might have an idea of what it means to cyberbully someone. Although this segment is humorous, the reality of the situation is very different.

Cyberbullying is any type of harassing, threatening, demeaning, or embarrassing another person online. Typically, this is done through mean comments, online rumors, and even sexual remarks. They’re usually connected with appearances, intelligence, race, sexuality, etc.

Essentially, anything that is posted online that’s intended to hurt or upset someone else, regardless of what the topic is, is considered to be cyberbullying.

Who is prone to cyberbullying?

The most common target for cyber bullies are children, young adults (especially girls), students, and members of the LGBTQ community.

As far as the bullies themselves are concerned, they come from all walks of life. Studies show that children with less involved parents and those suffering from depression or anxiety tend to display bullying behavior, but nothing’s conclusive as of yet.

Where are people cyberbullied?

There isn’t a single platform where all the cyberbullying takes place, and no online space is completely free of cyberbullying. Since most children and young adults access the internet via their mobile devices, this is the most common medium through which they experience this type of harassment.

Statistics show that Instagram is the most common platform for cyberbullying, closely followed by Facebook and Snapchat. Many people experience cyberbullying while playing online multiplayer games as well, and while YouTube is among the platforms with the highest number of users, only a tenth of users have so far reported experiencing cyberbullying there.

With over 500 million blogs on the internet, it’s no wonder that blogs are, in fact, one of the most popular targets for cyberbullies. While the comment section is usually reserved for discussions and questions for the author, you’ll notice hateful and hurtful comments sometimes tend to be prevalent. The victim of blogging bullying isn’t only the author, but many commenters as well.

The other side of blogging bullying is when the author of the blog themself posts hateful content that’s intended to embarrass, insult, or otherwise upset someone else. While this is the most prevalent among school children and students, it’s very common among adults as well.

Bullying as a whole has a huge impact on the victim’s mental wellbeing and their overall quality of life, and cyberbullying is no different. As a matter of fact, some studies suggest that bullies tend to be more aggressive online as there are rarely any real-world consequences of their actions, so the impact on the victims could potentially be even greater.

Cyberbullying can be a cause of alcohol and drug abuse, eating disorders, poor school performance, and more. All this serves to show how harmful cyberbullying is and how important it is to put a stop to it.

Cyberbullying around the World

While many countries are trying to impose anti-bullying laws, an effective preventative measure still hasn’t been discovered, and residents of many countries aren’t satisfied with how bullying is being tackled.

On the bright side, cyberbullying awareness is at an all-time high, meaning that the governments around the world will have to take measures to prevent it.

While most people are aware of cyberbullying, few know how to deal with it. Those who are witnesses to it rarely react, mostly because they cannot be anonymous. Parents are often not aware that their child is being cyberbullied because most children believe this to be a normal occurrence and don’t want to let their parents know.

Most children attempt to stop cyberbullying by blocking the bullies on social media platforms, and so far, this seems to be their best option.

Luckily, 48 states in the US have introduced electronic harassment laws, and 44 of them include criminal sanctions for cyberbullying.

While the above-mentioned statistics and studies are frightening, there is a silver lining to the growing problem of cyberbullying. Governments around the world are trying to control and prevent cyberbullying, the global awareness of the problem is on the rise, and many social media platforms are attempting to put a stop to cyberbullying as well.

As a final note, it’s important to teach the children about what cyberbullying is, what its impacts are, and how it can be prevented. As always, education is the only true solution.