by Ogi Djuraskovic
8 min read
FirstSiteGuide is supported by our readers. When you purchase via links on our site we may earn a commission. Read More 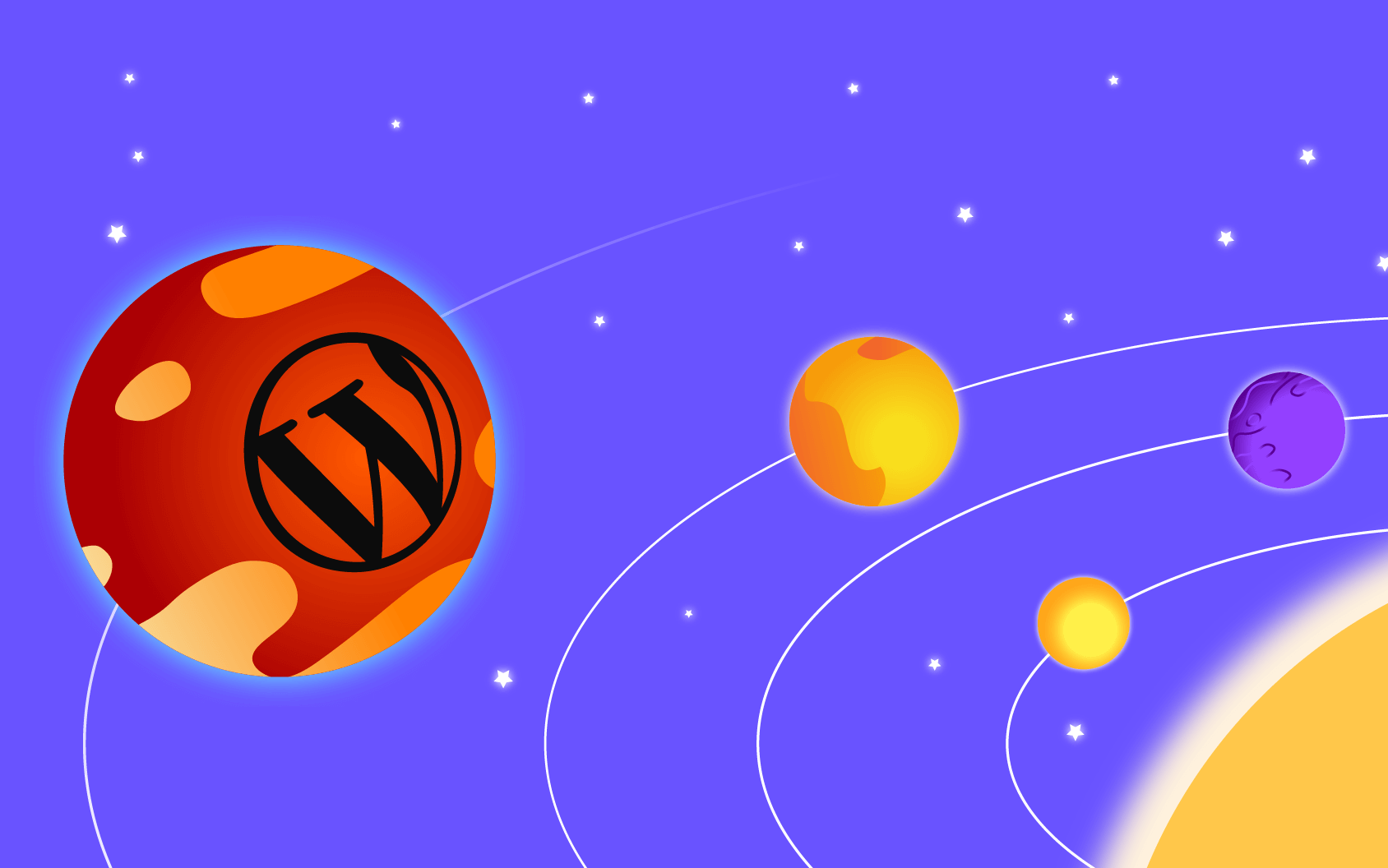 WordPress is one of the most popular blogging platforms in the world. Not only is it an incredibly straightforward tool to use, but it’s also fully customizable, which means that you can start a simple blog or build a complex website alike.

WordPress is compelling, which is one of its many defining traits. Anyone who has ever worked with it will know that anything is possible if you try hard enough. The astronomical potential of WordPress hasn’t gone unnoticed, as it has been the go-to tool for most websites almost since its inception in 2003.

WordPress has continually evolved in its 18-year run, and today has one of the most vibrant website design communities around. It has full support from the online community, it’s fully open-source, and most importantly, it’s completely free.

Since this is such an important tool, we’ve decided to cover some aspects of it in 2023. Below, we’ll talk a bit about the usage statistics of WordPress, provide some fun facts about the platform, and explore some developing trends. Together, this will all paint a portrait of the world’s most popular website design platform.

One of the most important metrics that define WordPress is its market share. Currently, WordPress is dominating the market, both as a website design tool and as a content management tool (CMS).

It has been dominating the market for quite some time, and as more and more websites are switching to WordPress, it’s only a matter of time before market dispersion occurs. A good example of this would be in the case of web browsers, where Google holds over 90% of the market.

While WordPress alternatives are gaining traction, such as Wix, Squarespace, and Shopify, their market share percentage comes nowhere near that of WordPress in both the website design and CMS market.

Content management systems are a technology that has changed the way that websites work. Things have changed quite a lot since the early days when website creators had to handle all of the content themselves.

Today, through CMS, administrators and moderators can upload, remove, and modify content on their websites with ease and in real-time. This makes website content management much faster, simpler, and ultimately, more efficient.

Perhaps the most integral role that CMS plays in website creation is that it makes everything much more straightforward. You don’t need extensive education, experience, or programming to make changes to the content on your website. All that you need is a basic understanding of how to use an interactive GUI interface, and the CMS will do the rest.

Below, we’ll outline six of the most popular CMS and website tools and see where they stand in the current market.

Do smaller websites and blogs use WordPress?

The beauty of WordPress isn’t the simplicity, the open-source access, or the non-existent price tag. What makes WordPress the world’s most popular website design tool and CMS is its scalability. WordPress is used by large enterprises for their internet storefronts and by people who are just interested in creating a personal blog.

WordPress is the premier choice for small companies looking for a simple to use but powerful CMS, enterprises that are looking for a scalable tool for their business operations, and everything in between.

While WordPress ranks at the top in the website design tool market, it dominates the CMS market, and 65.1% of all websites currently online use WordPress as their primary and sole CMS.

In regards to its market position, it dominates the competition with:

WordPress grew 26.6% in the last decade

A top-of-the-line tool such as WordPress fills a void in the market, making it that much more popular. It has never been the only available CMS or website design tool out there, but WordPress has always been one of the simplest to use and scalable tools on the market, giving it an edge over the competition.

It’s grown significantly since its inception in 2003, and the continued community support keeps this platform vibrant and developing. It’s just a matter of time before WordPress market domination reaches brand new heights, and it’s growth trends tend to reflect that.

To put the growth of WordPress into perspective, let’s examine the numbers. WordPress has grown by over 26.6% over the last decade. In 2011, WordPress held just 13.1% of the CMS market, which might seem a bit small at first glance.

However, first glances aren’t often correct, as WordPress was way ahead of the competition back then too. At that time, the CMS market share was so small that most websites weren’t using a CMS solution. In fact, in 2011, about 76.4% of all websites online weren’t using any CMS at all.

WordPress has dominated the market and continues to do so in 2021 in a spectacular way compared to the competition. The community behind WordPress has grown significantly, and so have the capabilities and potential of the platform itself.

WordPress holds over 42% of the market share, 23.5% more than the next best CMS

Many of the other top CMS solutions have also been available over the last decade. However, their growth hasn’t been nearly as prominent as WordPress.

A couple of new contenders such as Shopify and Wix have appeared in the last ten years, and they have a fairly small but still relatively strong position in the CMS market. However, WordPress holds more of the market share than all of its competitors combined.

Below, we’ll outline the growth rate of six of the other most popular content management systems and compare them to WordPress.

One of the most impressive facts about WordPress is the sheer number of plugins available. Currently, WordPress has over 50.000 different plugins, which can turn a WordPress website into anything you wish. Plugins enable added sophistication or bare-bones simplicity to any WordPress platform, which is why they are so important.

2. Over 14.7% of the top websites in the world are powered by WordPress.

From a list of the top 100 most popular and visited websites globally, about 14.7% are powered by WordPress and use WordPress as their sole CMS solution. Based on the stable growth of WordPress, it’s safe to assume that this number will continue to grow over the coming decade.

3. There are over 500 new WordPress based sites created daily.

About 500 of the 547,200 new websites every day are created with WordPress. That might seem like a relatively small number, but only a tiny number of these websites use a CMS, and most of the new websites that use this technology are powered by WordPress.

4. WordPress powers over 19% of all eCommerce sites with WooCommerce.

6. WordPress is available in more than 70 languages.

WordPress is a non-profit organization. However, the company behind it, Automattic, generated $1.3 billion in revenue thanks to other WordPress enterprises such as Envato and WP Engine. They brought in revenue of $95 and $74 million, respectively.

8. WordPress v4.9 is record beating with over 160 million downloads.

What do you think is the most downloaded software in the world? Currently, WordPress is at the very top of the list. According to the real-time download counter, WordPress v4.9 beats all previous records, with over 160 million downloads.

WordPress offers over 8,100 free themes at this point, and a vast number of paid themes as well. Themes make WordPress websites stand out from one another. They’re helpful adaptations of the overall tool and are usually further customizable by the developer.

10. There are about 27 new posts per second on WordPress websites.

WordPress powers most of the world’s websites in one way or another, and more people are using WordPress than any other platform.

11. WordPress is used by governments all over the world.

12. About 24.6% of WordPress websites aren’t using the latest version.

The latest WordPress version is 5.6 Simone, which is being used by about 75.4% of all WordPress users. So, around 24.6% of WordPress websites aren’t using the latest version of the platform as of writing this article.

13. Almost 37% of all WordPress websites use HTTPS.

HTTPS (Hypertext Transfer Protocol Secure) is an extension of HTTP, the most popular communication protocol globally. It’s used by about 37% of all WordPress-based websites.

The number of posts on WordPress websites isn’t the only astonishing number. As of 2021, WordPress is powering about 455 million unique websites. Since there are about 1.93 billion websites globally, roughly every fourth website in the world uses WordPress.

WordPress is one of the oldest CMS platforms out there. The very first version of WordPress was launched on May 27th, 2003. It’s an older web platform than other internet giants such as Facebook, YouTube, and Twitter.

16. WordPress held more than 1000 of WorldCamps worldwide so far.

WorldCamps are local conferences covering various topics related to WordPress. So far, over 1000 WordCamps have been held in over 65 countries, with more than 2400 speakers and 1100 sponsors involved.

17. WordPress.com is not the same as WordPress.org.

WordPress.org is a platform for the distribution of WordPress as open-source software that allows you to build your website. However, to launch a website, you’ll need WordPress hosting to install WordPress. Alternately, WordPress.com is a blog hosting service run by Automattic.

18. One WordPress theme has earned $1.3 million in sales and counting.

Among tens of thousands of WordPress themes, Avada is the most popular theme by far. It’s also the most frequently sold WordPress theme. This $59 theme has been bought over 200,000 times, generating over $1.3 million in sales and counting.

19. WordPress is widely used in the education industry.

Thousands of universities, colleges, and schools all over the world use WordPress to power their websites. The open-source license allows students and academia to study, modify, learn, and contribute to the development of WordPress core, plugins, and themes.

20. Jazz artists inspire the naming of all WordPress releases.

WordPress isn’t merely the best CMS and website design tool on the market. It’s a continuous online revolution. Since this tool is exceptionally adaptable, scalable, and easy to use, it will remain one step ahead of the competition for some time.

The age of WordPress has already arrived, and the platform’s popularity is growing. With new features, plugins, and themes being developed daily, WordPress is becoming even more sophisticated as time goes on.