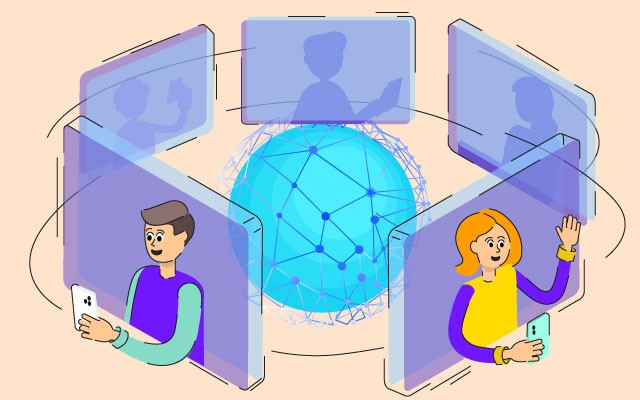 The majority of us couldn’t imagine living without the internet. We use it for entertainment, shopping, working, and more. But what are the actual internet usage statistics? Does everyone in the world have access to the internet?

While knowing these facts can quench the thirst of your curiosity, it can also potentially benefit your online business. The internet demographic stats and technology use will help you realize why you need to make certain improvements to your website, such as making it mobile-friendly and ultra-fast.

To get an answer to these questions and more, take a look at the internet stats and facts below.

Do statements such as “more than half people on this planet use the internet” bore you out? How many people in the world have internet? Do you want to know the numbers? Scroll below to check internet statistics and see how many internet users are there, what is the growth rate of internet users, and how many websites are on the internet.

1. 4.54 billion people use the internet daily

As of January 2020, internet addiction statistics show that there are over 4.54 billion active internet users across the world. Although the number of internet users in the world is increasing by the day, there are still over 2.99 billion people with no internet access.

2. There are more than 1.7 billion websites online

Have you ever wondered how many websites are on the internet? Currently, the number of websites is over 1.7 billion, and the number rises by the second. Since the creation of the first website in 1991, it took 23 years for the internet to reach its first 1 billion sites.

3. Around 59% of the world’s population is online

The global population in 2020 has reached 7.7 billion people. There are over 4.54 billion unique Internet users, meaning that they account for approximately 59% of the entire population.

4. The internet had 50 million users within four years

5. The average growth rate of internet users is 8.2% per year

History of the Internet

The Internet has gone a long way from being one scientist’s project to the world wide web used by billions. Before it all went smoothly, it was a bumpy ride for many who recognized the potential of the global network. Let’s take a closer look at the numbers related to the history of the Internet.

The first-ever website was launched on August 6th, 1991. The developer behind it was a CERN employee Tim Berners Lee. The site was about his World Wide Web project. Tim refused to patent the project, and his Web technology became open to the public.

In 1993, the first web browser was released to the public named Mosaic.

7. The term “Surfing the Internet” was coined by Jean Armour Polly in 1992

While we mostly browse the internet in 2020, “surfing the internet” was what users mainly did in the first two decades since the creation of the first website. The term was popularized in 1992 by Jean Armour Polly, a New York librarian.

We know that the internet is one of the most popular technological achievements of modern civilization. But there are still a few questions that remain unanswered. Let’s see which continent is addicted to the web and is there any country where almost the entire population has access to it.

9. Asia has the largest number of internet users at just about 2 billion

Internet world stats show that Asia is a continent with the highest number of internet users in the world, counting around 2 billion. Europe takes second place with less than half of this number, boasting just under 705 million internet users.

Unsurprisingly, China, as one of the most populous countries in the world, also boasts the highest number of internet users. As of 2019, China has 854 million active users. It’s followed by India and its 560 million users, while the USA takes third place with 292 million users.

Asia is a continent with the highest number of internet users, counting around 2 billion. Europe takes second place with less than half of this number, boasting just under 705 million internet users.

As of January 2020, Denmark, Iceland, UAE, Kuwait, and Qatar have the highest internet penetration rate of any country in the world. Between 98% and 99% of the population of these countries has internet access.

Browsing the web and watching online videos on the go was a dream come through for many millennials. It was borderline impossible before the late 2000s. However, new technologies enabled us to become surfers without borders. Take a look at the stunning internet statistics on technology.

13. 4.18 billion people use their mobile devices to go online

14. Smartphone traffic is slightly over 50% of total online traffic

15. Smartphones account for 80% of the total time spent on social media

Some of the most prominent players in the social media world are Facebook, Twitter, and Instagram. These three platforms, among many of the others, report that over 80% of the time spent on them is by smartphone users.

16. People spend an average of 2.8 hours a day browsing the web on smartphones

While in 2010, users spent only 0.4 hours browsing the internet via their mobile devices, today, they spend approximately 2.8 hours doing so. As stated, time spent online via smartphones will continue increasing in the coming years.

17. People spend 143 minutes online on mobile devices and 38 minutes a day on a desktop

The amount of time spent online varies by device. In 2018, the average user spent 38 minutes a day online on their desktop, and 143 minutes online on their mobile device. It’s expected that the amount of time spent online via desktop will continue dropping, while it will continue increasing via mobile. By 2021, it’s expected that users will spend, on average, 155 minutes online via their mobile devices.

18. The most popular activity on the internet is using email with over 90% of internet users

More than half of Earth’s population uses the Internet daily. The question is, why? Which one is the most prevalent use case? How has the expansion of the web affected the news industry? Here are the most interesting internet usage statistics.

19. Some 15% of regular internet users work more at home

The internet has enabled many people to work from home. While this offers great convenience, 15% of internet users who spend at least 1 hour a week online report that they work more at home, even though their time spent in the office stayed the same.

20. Internet surfers spend little time on TV and in newspapers

To no one’s surprise, those who spend more of their time on the internet spend much less time consuming other types of media. Internet users spend significantly less time watching TV and reading newspapers.

Over the past few years, global internet usage has reached unprecedented levels. Recent internet statistics show us that year by year, we see the number of internet users rise, and this trend is expected to continue well into the future. As time passes and technology advances, we’re bound to become more reliant on the internet and all the convenience that it offers.